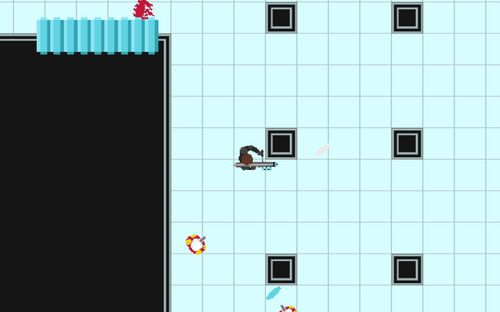 I very recently had the idea to stop trying to hammer away at larger projects that I'm not prepared for and focus on jamming for awhile. I did the Ludum Dare that week and the action-platformer game that my team built I got an itch to build an action game myself. When I found out the theme for this jam, I knew very quickly that I wanted to make a game where your bullets traveled into the future, to the chagrin of the player. The very premise of the game was frustrating and weird so that's how I expected development to unfold. I wasn't wrong. I put more consecutive ass-in-chair hours on this project than I have in recent memory, but as fun as the game was to make, I get that it isn't all that fun to play. My only aim was to make sure that, in spite of the mechanic working against the player, the game was still beatable. With a little bit of patience and practice, it is. For those that have the 'Flight' instinct and take the right turn at the right time, could potentially beat it in one go. Any difficulty in this game is a direct result of the core mechanic violating player interest. Though I have mixed feelings about the direction I chose to go in with the overall design, I am very proud of having written my very first, semi-working AI. Enemies don't activate until you get close, they don't instigate their walk cycle if they're too close. The edges are rough, but you can see the shape and that's more than I've ever been able to say. Altogether, I got what I was looking for out of the jam. Probably more. And I'm happy with the game I ended with. I hope you can find some enjoyment in it as well.

Shoot your way into the future!